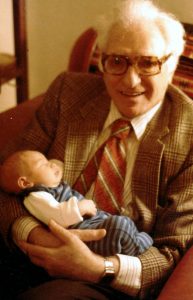 Milton Karl Munitz  (1913-1995) grew up in Brooklyn, NY in an Orthodox Jewish household. After youthful inclinations towards the rabbinate, he decided, instead, to go to The City College of New York to study philosophy. There, under the tutelage of Morris Cohen and Yervan Krikorian, he embarked on his intellectual career. He subsequently took his graduate training at Columbia, under the guidance of Ernest Nagel, Frederick Woodbridge and Irwin Edman. The two most penetrating influences at this early stage of his career came from attending classes with Morris Cohen and reading the works of Santayana. Cohen’s resilient and unrelenting insistence on critical clarity and Santayana’s naturalistic perspective formed two major themes of Munitz’s own philosophical work.

His dissertation, entitled The Moral Philosophy of Santayana (1938), both applauded Santayana’s espousal of philosophical naturalism and criticized what he saw as Santayana’s failure of nerve, particularly in his later writings, evidenced by what he interpreted as Santayana’s withdrawal into a form of idealism. Munitz’s interest in articulating a compelling naturalistic philosophy that could answer the requirements of a visionary metaphysics at the same time that it did not fall into idealism became the hub of his life’s philosophical work.

Inspired by Santayana’s naturalistic impulse, by Spinoza’s metaphysical naturalism, and by Einstein’s cosmological physics, he began to wrestle with the problem of creation. His work, Space,Time and Creation (1956), following shortly upon his meeting with Einstein at the Institute for Advanced Study in 1955, several weeks before Einstein’s death, was a treatment of this theme, and offered a critique of views which attempted to supplant the mysteriousness of creation with a facile scientistic, but ultimately unscientific, image of a “beginning of the universe.

This theme of mysteriousness about cosmological creation took, over the next decade, a more specifically metaphysical turn. In The Mystery of Existence (1965), Munitz argued that the problem of existence, per se, above and beyond the problem of cosmological creation, did not admit of simplistic philosophical answers. The concept of the unique mysteriousness of the existence of the world was an early, negativistic formulation of the positive concept of “Existence,” which he would introduce in several of his later works.

En route to explicating the concept of Existence, he chose to differentiate his view, in Existence and Logic (1968) from the concepts of existence put forth, primarily, by philosophical logicians in the Anglo-American tradition. Though, indeed, the speculative quality of his own vision often lent itself more agreeably to formulation in the context of existentialist and religious philosophy, he chose to engender this debate in the Analytic context because of his deep respect, earned at the knee of Morris Cohen and Ernest Nagel, for clarity and conciseness.

After spending twenty-seven years at New York University, and serving as the Chair of the philosophy department there, he went on, in 1971, to become Distinguished Professor at the City University of New York. During this period in which he taught both at the Graduate Center of CUNY and at Baruch College, he wrote two textbooks, one about the philosophical quest, generally, entitled The Ways of Philosophy (1975), and one specifically about the history of analytic philosophy, Analytic Philosophy (1978).

The mid-1980’s brought with it a return to philosophical cosmology from a new perspective, informed by the existential orientations of his middle work, and spurred on by the more recent cosmological formulations of Stephen Hawking, among others. In Cosmic Understanding (1985), he argued, (with the philosophical pointedness he so admired in Morris Cohen, and the scientific pointedness that he so admired in Richard Feynmann) that there could be no facile transition from theories about how the early universe developed to an idea of what came before that early growth. Having physically convincing evidence for the “inflationary big bang” did not, in his view, justify establishing a rigid conception of a metaphysically ambiguous “singularity” which certain physicists have postulated as predating, and giving rise to, the universe. Using Wittgensteinian categories, he developed the image of a cosmological “world picture” which did not admit of an external frame of reference.

Instead of leaving the matter simply at the level of critique, as he had done in his earlier work, Munitz introduced the notion of “Existence” as that feature of the world which, despite its inability, along with any other feature of the world, to extend outside of its naturalistic boundaries, represented the significance of the boundary condition itself. Extending the Einsteinian image of a geometrically boundless cosmos to the realm of ontology, Munitz argued that the “Boundlessness” of Existence was the crucial feature of its mysteriousness. Though not external to the natural world, it represented endless depth in the characterization of its ontological facticity.

The Question of Reality (1988) extended this inquiry by using Wittgensteinian categories, once again, to analyze a view of nature that would be ontologically satisfying, yet untainted by the additions of idealism.

His final work, Does Life Have a Meaning? (1994) , attempted to articulate a philosophy of human value based on his conceptions of nature, Existence and Boundlessness.

In 1960, he was the recipient of a Fulbright Fellowship and a Guggenheim Fellowship. In 1963, he received the Nicholas Murray Butler Medal in Silver from Columbia University. In 1967-1968, he was the Distinguished Visiting Professor of Philosophy at the State University of New York at Brockport for the International Philosophy Year held there.

He also served at West Point as the Visiting Distinguished Professor of Philosophy and as Visiting Professor at Bar Ilan University in Israel.

Throughout his life, Milton Munitz was a great lover of music. He played the violin and viola, and was a devoted student of Bach, Mozart, and, in his later years, Shostakovitch, among others. In his final years, he studied painting and drawing with energy and verve. He was a devoted husband, father, grandfather and friend.